We have always looked at nature and tried to understand its processes. Understanding the movement of planets and stars gave us the theory of gravity. It enabled us to send humans to Moon and soon will help us reach Mars.

Even with all our understanding of various physical processes, nature has still managed to keep one of the greatest mystery to itself - one of intelligence.

If you want to read more about the connectionist approach here is the introduction and implementation.

In this post, I am going to explain the algorithm which is responsible for the diversity of this planet - Genetic Algorithm

This algorithm can also lead to intelligent behaviour. The first time I saw this video

I was amazed by how close the behaviour is to real organisms. Further, this algorithm was also used in my autonomous car project.

What is Genetic Algorithm?

However, there is never a perfect copy of a gene. Some errors creep in. Theses are called mutations. 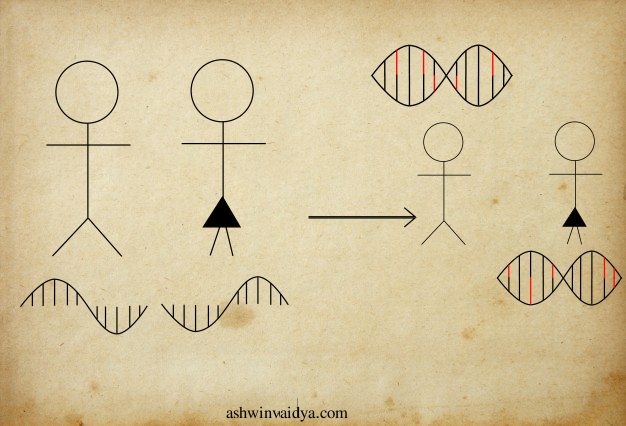 A mutation might help the offspring weather heat than its parents or peers. This process over thousands of individuals leads to the diversity and survivability of the species.

Now that we have made our excursions into biology lets come back to programming. I won’t be focusing on applying genetic algorithm to intelligence in this post but will teach you the nuts and bolts of it. In the end, you will learn to use it for your projects too.

For the explanation we will generate a target string using the genetic algorithm.

We start by generating a random population of strings with the same length as the target string.

Here are three examples of the first generation:

Now, for each member of the population, we calculate the fitness.

Fitness for this example is defined as the number of characters in the correct place.

Similarly, for the second and third-string, the fitness is 3 and 1 respectively.

A small example of the mating pool is 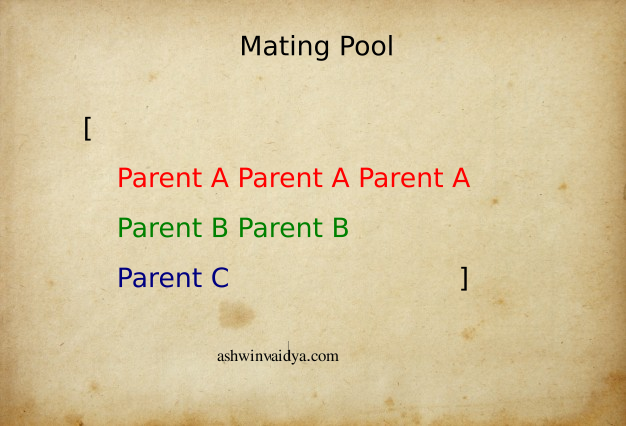 Here Parent A has the highest fitness and Parent C has the lowest.

A quick in the example and the math in the pseudo-code above: In the example, Parent A has max count 3. However, the parent with the highest fitness will have a count of 100 in our mating pool. This is because the fitness of the member equals max fitness and hence the ratio will be 1. Since it is then multiplied by 100, the value of n will be 100.

The second generation is created from the mating pool.

First two parents are selected from the mating pool. Then, a child is created by combining genes from both the parents. The term for this combination is called crossover. The genes of this child are mutated. This child now becomes a member of the second generation population.

The process of selecting two parents and then crossover and mutation is repeated to create each member of the second generation. This generation will also have the population count of the first generation.

In case of strings we do the crossover as follows: 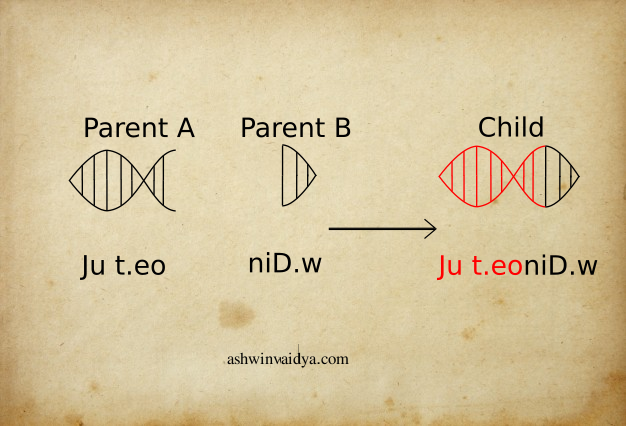 That is it! Running this simple algorithm for a few generations gives us our target string.

You can find the Python code here.